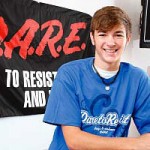 MOOREVILLE – A Mooreville teenager has been an ambassador for his home state.

Zach Sisk, 18, has served as Mississippi’s representative on the Drug Abuse Resistance Education, or D.A.R.E., Youth Advisory Board for the past four years. During that time, he’s attended an annual meeting in Washington, D.C., met with student representatives from all 50 states and discussed ways to make the D.A.R.E. program stronger.

He then takes those ideas back home and shares ways Mississippi can improve its programs.

“It is probably one of the best things I could have ever done,” said Sisk, who graduated from Mooreville High School in May. “It has opened my mind to other people and what other people are like. There is a lot more out there than Mississippi and a lot more problems out there.”

D.A.R.E. is a national educational program that tries to help students avoid drugs, gangs and violence. During the school year, D.A.R.E. representatives teach a certain curriculum in classrooms, and during the summer, the program often offers a camp.

Sisk said D.A.R.E. has been part of his life for as long as he can remember. He won a coloring contest through the program in kindergarten and won an essay contest in sixth grade that netted him a trip in a limousine. He also frequently attended the summer camp before becoming one of its counselors.

Those efforts prompted Lt. Sheri Hall of the Lee County Sheriff’s Office to nominate Sisk to represent the state on the advisory board. Hall is the state coordinator for D.A.R.E and teaches the program.

Sisk’s service on the board began when he was a freshman and ended with his high school graduation. He’ll be replaced by another Lee County resident, Saltillo’s Leigh Sumner.

However, he intends to stay involved with the program however he can. He helped with this year’s summer camps and hopes to continue to do so.

“I’ve learned a lot from D.A.R.E., and I want to give someone else the chance to learn what I did,” he said.

Hall said that Sisk has done a great job of being a mentor to younger students during the past few years and noted it is something she expects him to continue to do.

His mom, Joanne Weith, said she watched her son mature during his time on the advisory board.

“It gave him the opportunity to talk about the issues in our community, and it gave him a voice,” she said. “I watched him mature by being able to speak in front of a large number of peers and represent the state about the D.A.R.E. program here and its needs. I would definitely say it molded him.”